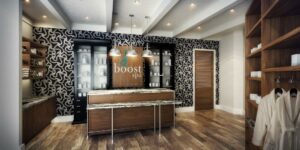 The highly anticipated Lido House in Newport Beach opened to rave reviews this past month. In 2011, The city of Newport Beach began considering its options regarding the old City Hall site, tossing around ideas for community centers as well as residential or commercial uses. The effort to reclaim the peninsula from what many were referring to as a “war zone,” was a major pain point that lead city officials and residents to support the revitalization efforts to return the area into a family & tourist friendly destination.

As all options were considered, the Lido House Hotel project won out and the city staff began their move into the new City Hall site in Newport Center in 2013.