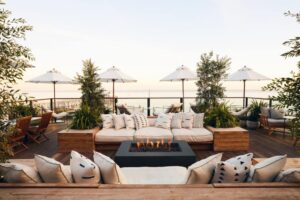 Surfrider Malibu Gets A Facelift With Indoteak Design

The legendary Surfrider Hotel in Malibu California first opened in the 1950’s and was a perfect little motel for visiting surfers who flocked to the famed long green walls of the legendary right point. Pop culture got its first look at Southern California beach lifestyle with the cult classic film “Gidget.” That movie alone turned the sleepy surf town of Malibu into a world wide draw which also watched the surf crowds explode from a few dozen in 1951 to hundreds or new surfers chasing the dream of Gidget by 1957.

That was just the beginning and the little Surfrider Motel was constantly booked solid for decades until it fell under disrepair and was sold in 2013.